This is an era where more and more attention is paid to the aesthetic and practical use of electronic products. The development path of mobile phones is a testimony. Laptops are another product that everyone needs, so what kind of laptop does a consumer need? Consumers open a shopping site such as Amazon or Taobao that is among the top in the world to search for mainstream manufacturers’ laptops. If consumers think about the aesthetic and practical premise, they will almost certainly feel disappointed. Today’s mainstream manufacturers will only use excellent designs on high-priced products. Their products from $299 to $599 are hard to capture consumers’ hearts.

What about another kind of notebook?

Let users talk about the current notebook market with the premise of use. In addition to the price, the other side of this market is another scene. The products of the whole market are divided into different levels, and the current notebook computers can be roughly divided. For gaming notebooks and office notebooks

If consumers think about what they are doing with their laptop, they might want to mention the following activities: Office and Home use; Browsing the web; watching videos; light Gaming.

Most consumers work on laptops, browse the web, watch videos, and play games that are not particularly demanding. If consumers don’t need to run large games and large industry software, they don’t have to buy a laptop for more than $599. If mainstream manufacturers don’t notice this demand from consumers, an expert will think other companies will target this market. In case there is such a product? This kind of product that looks good, meets the needs and is very friendly. There are such cases in the mobile phone field.

Since 2011, a manufacturer called Xiaomi has been subverting the smart phone industry. Before Xiaomi, the price of smart phones was always high. Who is the spoiler in the field of notebook computer?

That spoiler is BMAX. They launched their first product – BMAX MaxBook Y11.

The BMAX MaxBook Y11’s body is made of full-metal design, and the details are quite tough. The position of the A-face brand logo is placed on the upper right side. This is a design I like. Although it is a two-in-one metal body, its outer casing is made of all-aluminum alloy. It is exquisite and light. It is about 13mm thin and about 1kg light. It is less than the thickness of a book. Even children can easily pick it up and carry it with them. Carrying it with a user will not add a burden. It controls the thickness to 13mm, even if it is compared with the traditional thin and light, the portability performance is worthy of praise, consumers will think this is very good. When entire notebook is in the hand, BMAX MaxBook Y11 is a full-featured 2-in-1 notebook, and it is like a pleasing ornament. 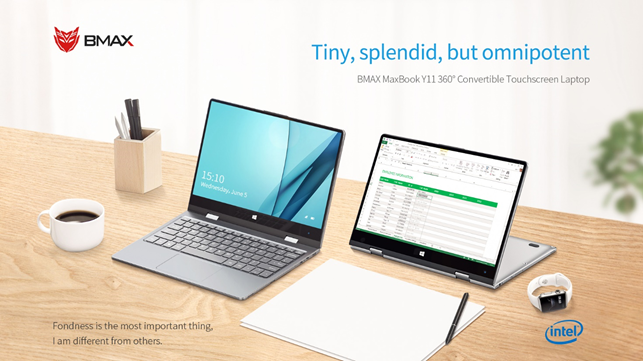 The BMAX MaxBook Y11 has only the BMAX logo on the A side. This design is the simplest mode. The machine adopts a narrow bezel design, which makes the body of the 11.6-inch screen a full circle smaller than the traditional notebook. At the same time, thanks to the narrow bezel design, the BMAX Maxbook Y11 screen has a proportion of 86%, and the visual effect is excellent. The 360 degree flip is also one of the most important features. Many consumers really like this feature. The user can flip the notebook into different modes in different scenes, which is convenient for the user to use. Although the BMAX MaxBook Y11 is such a thin and light notebook, the performance of this notebook is beyond expectations. Equipped with the 8th generation Intel Gemini Lake processor, it can respond quickly and switch between web pages and applications. It can be easily completed even with harsh tasks. It uses 256GB SSD and 8GB RAM to read and write at high speed to shorten the booting-up time. When traveling, the user may carry a tablet for leisure or work. The BMAX MaxBook Y11 uses a 7000mAh large-capacity battery pack to provide up to 6 hours of battery life. The user doesn’t have to carry the charger with him or worry about the battery lifetime. Being focused on getting the job done or enjoying your time is the only thing to the user. 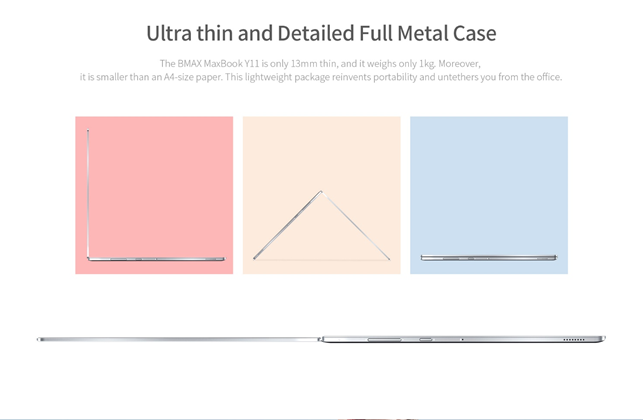 It is worth mentioning that the BMAX MaxBook Y11 is also equipped with a high-speed Type-C interface, which not only can transmit quickly, fast charge, but also external display box, can be used freely in a variety of scenarios, creating more possibilities.

Small body, big connotation, BMAX Maxbook Y11 2-in-1 notebook is thin and light, but has powerful features. The user has a MaxBook Y11 in hand, then it can be easily achieved for leisure, office or game needs. If the user want to travel with a notebook which meets the needs of a variety of office, leisure and gaming, then the user will think the BMAX MaxBook Y11 is a very good choice for him.

Beautiful, 360° Convertible, High performance, Stunning Full HD Touch Screen, Good Typing Experience in One.  So, what is the price?