Before The Launch of The GULF Exchange, GULF Cryptocurrency Will be Listed on Bitmart and Lbank.

Dubai, UAE, June 16, 2022 – (SEAPRWire) – The GulfCoin Initial Coin Offering (ICO), which was run by GULF software and technology, has successfully completed its run as of today, the 15th of June. 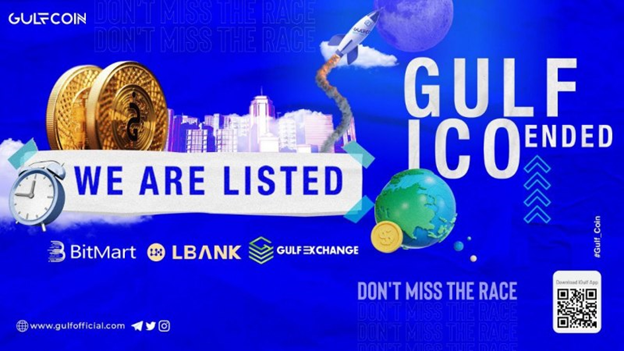 One of the primary goals of this initial coin offering was to create a means of financial inclusion for people who, in the absence of such a means, would be excluded from the digital revolution.

Since it was first introduced, GULF has been the subject of a great deal of interest and admiration.

Crucial benchmarks in the journey

To begin, the soft cap was reached in a little under a month, which is an astonishingly short amount of time for an initial coin offering. Just a few days before the initial coin offering (ICO) is set to end, sales have already surpassed the target of 300 million GULF for the crowd sale. And continued to reach 400 Million GULF.

GULF has developed an outstanding advertising campaign for their company. The forward-thinking ideas behind GULF have garnered support from a diverse group of influential people, including YouTubers and crypto industry professionals.

Additionally, a number of global cryptocurrency exchanges have given the go-ahead to GULF to list GulfCoin on their platforms.

The GULF Know Your Customer (KYC) documentation has been validated and authorized by SolidProof in addition to Soken.

GULF has also introduced the iGulf app, which can be downloaded on mobile devices running either iOS or Android.

The broadening of the demographic that can access and make use of the Blockchain technology is the primary objective of this project.

The plans that GULF has laid out are rich in exciting opportunities, and they have made it abundantly clear that accomplishing their goals is essential.

Later on this month, the public will be introduced to The GULF Exchange, a brand-new trading platform that is bilingual and features cutting-edge technology.

In addition, GULF has been putting a lot of effort into developing its GULF NFT Marketplace. A NFT marketplace allows for the creation and sale of NFT goods that have been created by users.

GULF is a Blockchain initiative by forward-thinking crypto professionals and financiers from the Arab world and other parts of the world who are establishing a Blockchain project with the goal of assisting the general public in embracing the Blockchain revolution. The primary objective of the GULF mission is to provide assistance to underserved communities in their transition from conventional financial markets to the cryptocurrency industry.